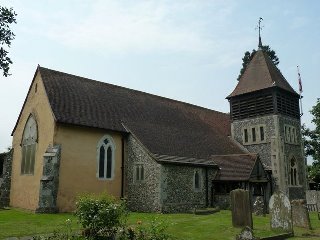 St Mary Magdalene Church is listed Grade II and is a small, essentially 13th to 14th century building, with a single north aisle to the nave. There has been a tradition that much of the early church was built c.1343, as indicated by the style of decoration of the chancel windows. During 1999, the old plaster rendering in the chancel was removed both inside and out for renewal. Inspection of the hidden construction revealed the chancel to be at least 100 years older. The internal bull-nosed roll moulding, the north window and the sedilia are 13th century. In addition, the type of flint work, hidden once again, arranged herring-bone fashion, suggests the an 11th century building. The use of these split flints gives a possible 12th century dating for further work.

In the chancel, the piscina, uncovered in 1999, is carved out of a 12th century column capital which must have come from the previous building. Canterbury Cathedral has a similar capital, dated 1160AD.

Originally, there was a medieval screen across the chancel opening, but it was taken down in 1886 and it was used to make the present pulpit, reading desk and clergy stall. In 1935, the son of the Rector responsible for the alteration and to atone for his father’s sins, had plans drawn up and offered to have the screen reinstated, but so little of the original woodwork could be used it was decided to abandon the idea.

There is a small Mission Room on the village green at Longfield Hill, no longer in use, which was originally the Longfield School, built in the late 19th In 1841 the population of Longfield was 128

The church has a fine old bible, printed at Oxford in 1685. It is leather and brass bound and measures 18’’ x 12” and is 4½ inches thick. Inscribed on the front cover page is the following:

“A thing of beauty is a joy forever.”

with the following explanation:

Peter Harnett Jennings, 1816-1893, scholar C.C.C. Camb.; Rector of Longfield 1866-86 gave this Book, a copy printed in 1685, of the most valuable thing this world affords, to the church of St Clement, East Dulwich, where it was constantly read and highly valued for the 53 years of the incumbency of his eldest son, the Rev. Prebendary H. E. Jennings, by whom on June 19th 1938, it was returned with loyal affection to the parish church of ‘St Mary Magdalene’, Longfield, and honourably accepted by the Rector on the four-hundredth (400th) anniversary of the placing of the English Bible in the parish churches of England.”

The Authorised version of the bible still in use has a shorter but interesting history, which is told in the inscription

“This Bible was part of a consignment being shipped to America in 1941. It was picked up after enemy action had sunk the ship, dried out in a bakery at Margate, Kent, by Mr A.F. Dunkley, and preserved.

It was given to his son, Rev. R.A.L. Dunkley after his ordination and subsequently presented to ”St Mary Magdalene Church” Longfield, Kent; his first living as Rector, in the second year of his ministry, 1965.”

Parish of Longfield, in the Diocese of Rochester

Patron, the Crown, in the gift of the Lord Chancellor

Up to 1066, Kent was a prosperous part of England, in part due to its close proximity to the continent and the fact that it had not suffered severely in the Danish wars.

After William defeated Harold, at the Battle of Hastings, he set to work reforming the church. In 1062, William had appointed an Italian monk, Lanfranc, as Abbot of Caen, and in 1070 he made him Archbishop of Canterbury. It was Lanfranc who restored Longfield to Gundulph, Bishop of Rochester. Longfield was one of the parishes which had been ‘wrested from the church’, during the Danish wars. Anschitil, the Priest, the first Rector of Longfield, came under the Ecclesiastical Jurisdiction of Gundulph. The Bishop of Rochester was known to be ‘very competent at building in stone.’

Willliam appointed him to supervise the building of his first fortress palace in London. At that time, the parish of Longfield was described as, ‘a small parish, long and narrow; it contains no coppice or woods, excepting shaves around the fields; and the land is very poor and hilly, the surface chiefly chalk and much covered with flint stones.’ The first recorded name of the village is Langafelda c. 964 -995AD

The heading on the 1558 church registers is Longfield.

The following is an extract from the Domesday Book 1086 AD, in respect of Longfield.

‘‘The same Bishop holds Langafel, and Anschitil of him. It answers for one suling. There is the arable land of ….. In demesne there is one team, the nine villans with seven borders, have two teams, It was worth seventy shillings, and now a hundred shillings.”

The old windows are 14th century square-headed, and the one closest to the vestry door, on the south side, contains our oldest glass fragments. Possibly a St. Christopher. The Font is a simple example from the medieval period. Being quite deep it is possible that infants were baptised by total immersion.

The bell called the ‘solitary little tinkler of Longfield’, by Pevseur, is dated at 1360. Now cracked and defunct, it has a similar, younger version in use in the belfry.

The church was extended westward in 1899 and is easily identified by the change in style of the roof beams and thickness of the walls.

There are only three tombs within the church, one is in the centre aisle towards the chancel step and two in the north aisle. One of the tombs in the north aisle is decorated with a favourite 18th century motif. The skull and crossbones with sand-timer reminding us of the passing of our years and our own mortality. It is not, as many children who visit our church assume, the tomb of a pirate!

This was held to bring to book farmers who were slow to pay their rents and tithes, as well as mischievous churchwardens and wayward clergy. Langafel Close, to the south side of the church, was the site of a very old house with extensive grounds. This was Longfield Court and it was here that former Archdeacons of Rochester sat in judgment on behalf of the bishop. The tradition that this was once the site of a former monastery is not confirmed by historical evidence. It may be that a house belonging to the church led to talk of a ‘religious house’ or a place for a community of clerics. The evidence for this having been the seat of Archdeaconal rule is much stronger. There is also a rumour of a tunnel running between the house and the church, alas this has never been proven.

Anyone attending the Annual Parochial Church Meeting, or reading the Annual Accounts, may have seen an item relating to Dr Plume’s Trust. We felt that readers may be interested to know a little about Dr Plume and so are pleased to publish a few snippets of information about the gentleman in question.

Dr. Plume, Archdeacon of Rochester (1679 to 1704), was born at Maldon, Essex and baptised in All Saints’ Church there on August 18th, 1630, ”Thomas, son of Thomas and Hellen Plume.” His father became an Alderman of the Borough of Maldon in 1632, and resigned that position in 1653, as is quaintly expressed in old records of the town, ”at his earnest desire and by reason of his age, disability of body and because he had removed his habitation out of this Burrough.” Dr. Plume was educated at Chelmsford School and at Christ College, Cambridge. He died, when Archdeacon of Rochester, in November 1704 and was buried at Longfield, Kent. The Latin epitaph, ordered by himself in his Will, translates:

‘Here underneath lies the Archdeacon of Rochester, the greatest of sinners, would that I might say of penitents also. Seek his name in the book of life. A day will come which will see me restored to light.’

He was one time Vicar of East Greenwich (1658 to 1704) and is mentioned in 1684, when, as recorded in J W Kirby’s ”History of Roan School” (the Grey-Coat School mentioned), ”it is agreed to allow the Vicar of the Parish 40/- ‘for his pains in catechising and expounding the same every Saturday in the afternoon, in Lent yearly to the Grey-Coat Boys’

He was, several times, mentioned by Pepys in his ‘Diary’ – perhaps the most amusing being this; ”1665, Dec 3rd (Lord’s day). It being Lord’s day, up and dressed, and to church, thinking to have sat with Sir James Bunce to hear his daughter and her husband sing, that are so much commended, but was prevented by being invited in Colonel Cleggat’s pew. However, there I sat, near Mr Laneare, with whom I spoke, and my fat brown beauty of our Parish, the rich merchant’s lady, a very noble woman, and Madame Pierce. A good sermon of Mr Plume’s.”

He founded the ‘Plume Chair of Astronomy and Experimental Philosophy’ at Cambridge University and his contemporaries there had the little memorial window placed in the south wall of the chancel. His books are in the care of the Parish of Maldon on Sea, Essex, as his family had been influential merchants in that region.

In his will, Dr. Plume made several charitable bequests, involving areas within the Diocese of Rochester, and St Mary Magdalene benefits in the form of an annual grant to maintain his grave, which is located behind the church, against the south wall of the eastern end of the nave.